I'm often asked what is the best charge rate and how much can I charge a Tesla Module? This question depends on several factors but the primary is the State of Charge of the Battery and temperature. Since a Tesla Module is a part of the car is no official documentation is available, but many sites report different numbers. Below is my estimate for the charging and temperature curves.

The Tesla modules can be charged very aggressively in the car on a Super Charger that controls the Current based on the State of Charge.

As the curve shows the charge current must be reduced as the battery gets closer to full.

Regen is limited to the battery's normal operation range from 68 to 113 Fahrenheit.

Charging with Inverter/Charger or Solar Controller

The Tesla Car and the Super Charger is very intelligent based on temperature and State of Charge. The current hardware available for RV installation is not that smart. It either charges or not. Typically is also a standard 3 or 4 steps charging cycle the only option.

The only way to handle the temperature issues is, in my opinion, to keep the battery within the optimal range between 68 and 113 Fahrenheit, we accomplish that by having active heating that is getting active if the temperature of the fluid get below 75 Fahrenheit. Without using the liquid for heating can temperature difference occur between the outer and inner part of a module based on the installation.

The maximum Current for charging is a lot more complex. This depends both on the minimum and maximum State of Charge the Tesla Module is used with. The other issue is the charging algorithm., most chargers were designed when Lead-Acid was the only option and have a Bulk, Absorption, and Float algorithm. The Tesla Module behaves kind of a Lead-Acid battery for charging that this algorithm works with some adjustments. 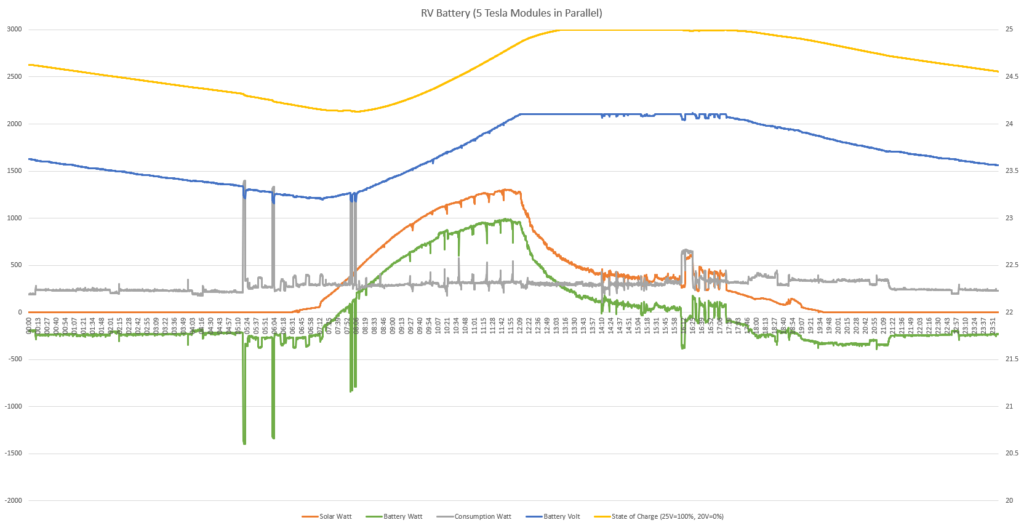 This is typical charging from our Solar Controllers, The yellow line is the State of Charge, the blue is Module Volt, and the green is Watt/Current going into the Battery. As the Volt grows to the maximum charge limit (Bulk) is the State of Charge steadily growing too. When the maximum Volt is reached is the Current reduced to maintain the Volt (Absorption). After a certain time in Absorption is the controller switching to just hold the Volt.

The MorningStar solar controllers are set for Absorption Volt = 24.1, Absorption Time = 12 Hours. This basically accomplishes that we hold the 24.1 Volt the whole day until the sun sets in the evening.

Our Magnum MS4024 is set for Absorption Volt = 24.2, Absorption Time = 4 Hours, and Float Volt = 24.0, but this charging is rarely used only when we exercise our generator.

How many Amperes can I charge with?

So staying within the temperature range and selecting a range of State of Charge operations can the maximum Ampere for charging be calculated. Since we cannot control the Ampere we must work within a range where the chargers never output too much. We have decided to use our modules from 3% to 80%. 80% is the lowest Current being 97 Ampere. With the 5 modules in parallel can that allow us a maximum charge of a whopping 485 Ampere @ 24.1 Volt and staying within the limits. But if we only had a single Tesla Module the 105 Ampere from the Magnum Charger is exceeding the way the Super Charger handle the battery and adding solar on top is 120 Ampere, so we need to stay in a spot where 225 Ampere can be allowed. From the below chart can that allow us to use our modules to 90% State of Charge. We decided to only use 80% State of Charge to increase the lifespan of the module.

This is also the maximum limits. A Tesla Car that has always been Super Charged have higher degradation of the battery so staying at 50% of the maximum Ampere is what I consider safe. On normal days when only the sun is charging is our maximum charge only 25% of the maximum allowed.

8 thoughts on “Charging a Tesla Module”